TL;DR: Farmland, Ketchup Doritos, and a really out of tune guitar.

Today, I decided to get an early start. I woke up at 5:30am, rushed to the bathroom, packed up all my things, and walked out the door of my host’s home at approximately 6:15am.

As I walked down the driveway to get my bike from the garage, Jamie, my host, happened to be working outside in a bathrobe.

“Hey, surprised to see you up this early,” he said. “Would you like any breakfast?”

“Na, I think I’m going to head out for the day. Thank you for the offer, though!”

“Oh, well before you leave, let me show you my hawks,” he said.

Jamie then went into the garage and found a small butcher knife. He then grabbed a small bird carcass from a cooler nearby, placed it on a table in the garage, and proceeded to slice the carcass cleanly in half.

Taking the bird carcass in one hand, Jamie walked over to one of the closed doors in the back of the garage and carefully opened it, motioning for me to follow him inside.

I peaked my head inside and there, in a room no bigger than a walk-in closet, was a red-tailed hawk just chillin’ on one of the wooden perches mounted to the wall of the room.

After giving one half of the bird carcass to the first hawk, Jamie showed me his other hawk in the room next door, another red-tailed hawk of similar size, and explained that he keeps the birds as pets and also showcases them at local schools for educational purposes.

After processing what I just saw, I packed up my bike, thanked Jamie for his exceptional hospitality, and promptly left the farm at 6:30am.

Let me start by saying the riding and weather today was fantastic.

After leaving Port Ryerse, I traveled South towards Lake Erie into a fairly remote area and when I say remote, I mean remote. It was the kind of area where numerous paths into the forest could be seen with signs that read “pedestrians only – TAKE AT YOUR OWN RISK“:

A couple miles later, I happened upon a small food mart, got some delicious ketchup flavored Doritos (yes, ketchup flavored), and squatted for two hours on the curb furiously typing away at my phone in an effort to catch up on these blog posts.

Unfortunately, when you’re a dude in spandex sitting there with a bike that just screams “I’M TRAVELING SOMEWHERE”, people, especially Canadians, just tend to walk up and start talking to you… and then 10 minutes will go by and they’re still talking to you.

…and here comes the rant…

Look, I get it. I’m a bicycle tourist who might as well be a unicorn around these parts… but there’s only a few hours or less each day when I’m not biking, sleeping, eating, or attending to other things. Believe me, I very much appreciate your interest, and I’d absolutely love to keep chatting with you about the trip, but please understand that I have to be somewhere at the end of the day.

But in all seriousness I enjoy interacting with the locals… even if they are a little too eager to chat at times.

I continued West towards Port Stanley, my destination for the day, and turned onto a road called Lakeview Road. In short, Lakeview Road was just incredible. The road was smooth, totally quiet, and miles of farmland and wetland lined the street on either side: 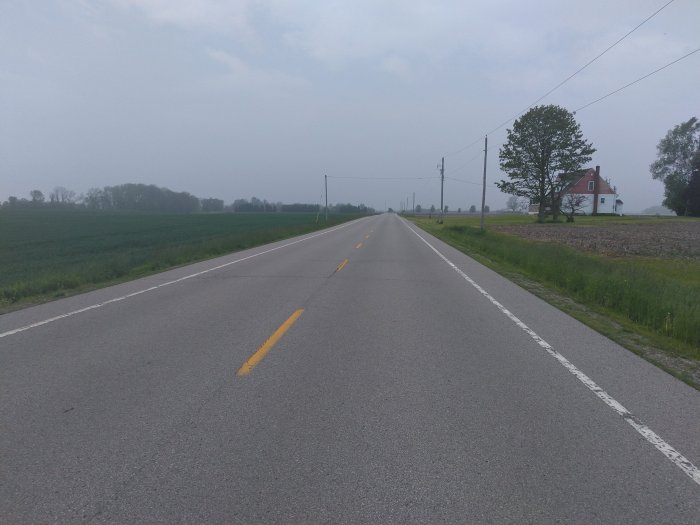 I even helped a turtle cross the road:

During my discussion with Lee last night, he mentioned that the northern coast of Lake Erie was a particularly popular area for migratory birds.

As I was riding along, I looked out to my right and suddenly witnessed two sandhill cranes stepping ever so delicately through a beige crop field:

Having only seen these type of birds in zoos, it was quite cool to see them roaming around in the wild like that.

During the next couple of hours, I happened upon an asparagus farm and stopped at a series of educational boards about Norfolk County’s fleet of wind turbines: 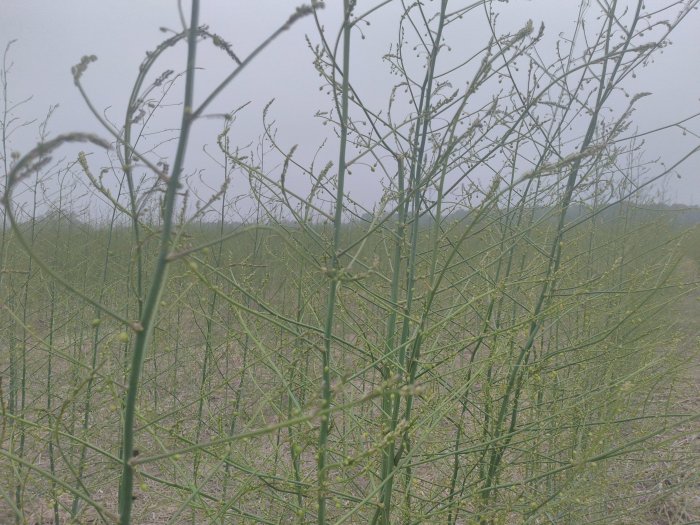 Yup, that’s what an asparagus plant looks like. The more you know, right? 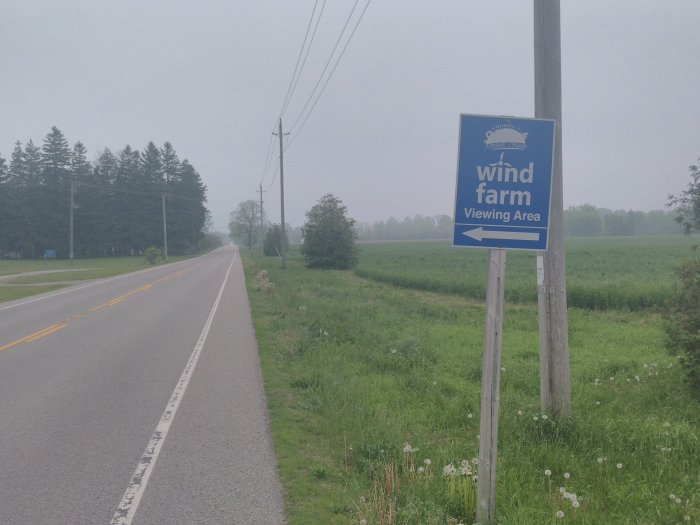 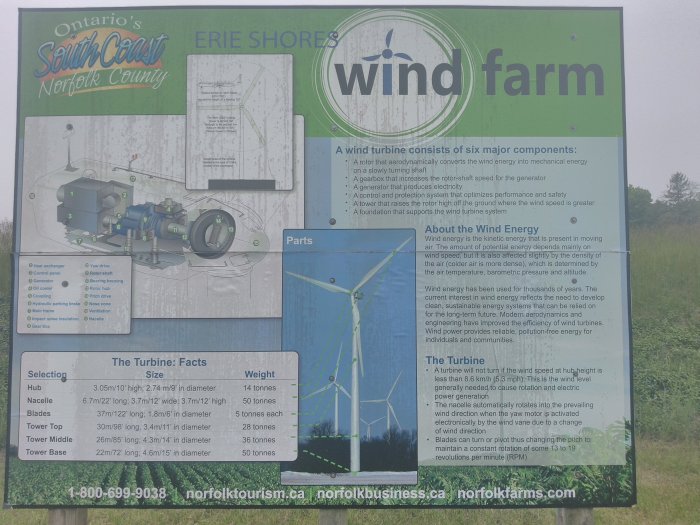 After arriving in Port Burswell, a quiet coastal town located about 30 miles from Port Stanley, I rode around town for bit and happened upon an adorable little public piano and guitar station: 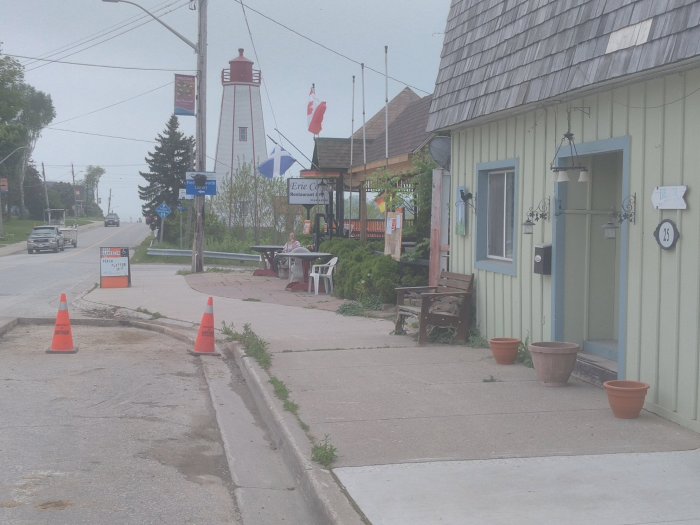 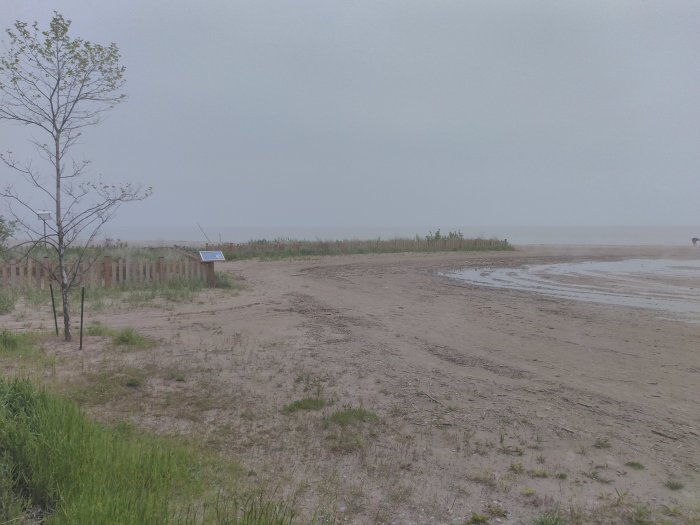 Did I play the guitar? Yes, yes, I did. And DAMN did I feel like a vagabond.

Soon afterward, I stopped at an ice cream and burger place called “Simply Scoops” and ate a veggie burger and poutine in true Canadian style:

…and then I continued along some rural roads for miles… 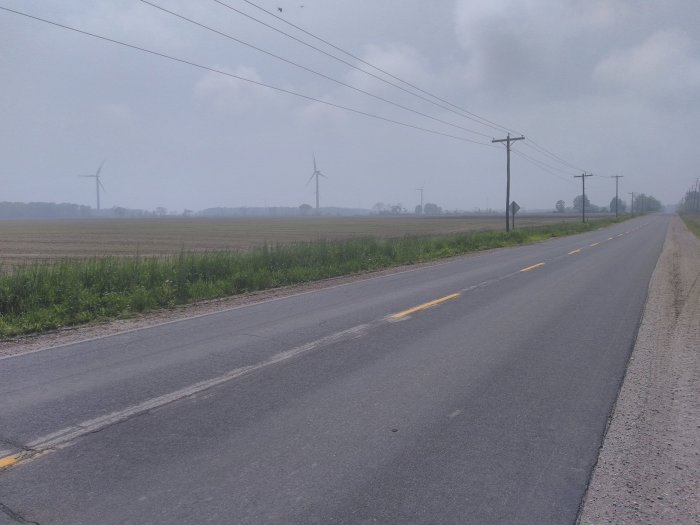 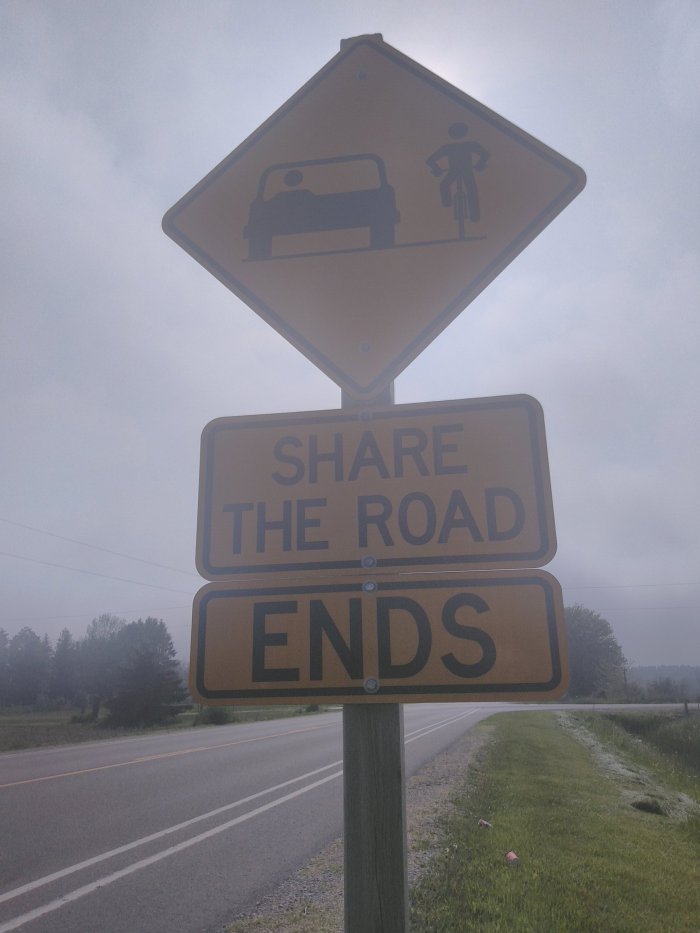 After continuing along miles of absuredly straight roads, I finally made it to Port Stanley. Woo hoo!

After biking through town and pushing my bike up one short, but absuredly steep climb (I basically did three pedalstrokes and said “na, I’d rather not snap my chain today”), I met my host, Terry, at his lake house right along the coast of Lake Erie. Terry, a retired businessman, was probably the chillest dude I’ve met thus far on this tour. If the calmness of Lake Erie could be embodied in a person, it would be this guy.

After briefly chatting with Terry and his son about some of their cycling endeavors, I pitched my tent, changed into some casual clothes, and strolled down a short, sandy path to Lake Erie:

There, I proceeded to bath myself in the lake, munch on some peanut butter and granola filled tortillas, and not give a single fuck.

Tomorrow, I’ll be heading Northwest to somewhere in Ontario. Where that will be? I’m not quite sure. I still have yet to hear back from two hosts I’ve contacted on Warmshowers and may end up stealth camping for the night.